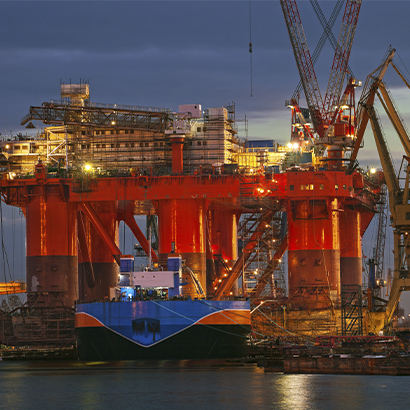 Represented a publicly traded midstream company in the Marcellus and Utica Shale plays in a two-year investigation of alleged violations of the Clean Air Act.

Assisted a leading offshore drilling contractor in connection with a dispute regarding the refurbishment and upgrade of two jack-up drilling rigs. The rigs were being upgraded to satisfy contractual requirements under contracts for the hire of the rigs. The construction activities on the rigs were significantly delayed and disputes arose over hundreds of Project Change Requests issued during the works. We provided advice and assistance to facilitate the resolution of the various disputes and the departure of the rigs from the shipyard short of arbitration.
Represented the engineering subcontractor in pursuing claims in ICC arbitration in London against the prime contractor on a Gulf of Mexico topsides engineering project. The parties entered into a settlement after the matter was pleaded out and disclosure had taken place.
Represented a U.S. alternative investment management firm, with US$58 billion under management, on its investment in the US$17.5 billion capital-raising by Sinopec Marketing, a PRC State-owned company with over 30,000 petrol stations in the PRC, pursuant to Sinopec Marketing’s “PRC mixed ownership reform” program.
Representing Entergy, a Fortune 500 integrated energy company, in the Texas Eastern Transmission, LP rate case before FERC; this is the first time in over 20 years that the pipeline has come in to refresh its rates.
​Advised a Texas-based oilfield services company on the negotiation and closing of a $25 million revolving line of credit facility with Bank of America, N.A., to cover operating and company expansion costs.
Represented an American midstream natural gas and crude oil pipeline as eminent domain litigation and acquisition counsel in connection with construction of the Shin Oak Pipeline, a 571-mile natural gas liquids pipeline, through portions of Texas from the Permian Basin to Mont Belvieu, Texas.
Assisted ENGIE Gas and LNG, LLC on regulatory issues related to the sale of an Everett, Massachusetts liquefied natural gas (LNG) import and regasification facility to Exelon, an American Fortune 100 energy company.
Advising a leading independent oil and gas company focusing principally on exploration, appraisal and production opportunities in Norway and the UK, regarding a hostile takeover.
Represented Range Resources Corporation, a leading independent natural gas company, successfully defending the client against plaintiffs who opted out of a 2013 class action lawsuit. Plaintiffs sought to recover allegedly underpaid royalties plus statutory interest thereon, punitive damages, attorneys’ fees and litigation costs. The jury returned a verdict for our client on all counts.
Advised one of the world's largest oil field service companies on the insurance coverage claim flowing out of the Deepwater Horizon incident in the Gulf of Mexico.

Advised an independent oil and gas company in connection with its acquisition of a producing oil field in Brazil, from a semi-public Brazilian multinational corporation.

Represented an organization committed to the responsible development of natural gas, as a potential intervenor, in Dunlap, et al. v. Department of Conservation and Natural Resources, PA State Board of Property Docket No. 2018-003, which is the first case in which a tribunal will decide whether it is the Commonwealth or, instead, private parties who own the oil and gas interests that exist beneath streams that the Pennsylvania General Assembly has designated as public highways, but that are not navigable in fact.

Advised an offshore drilling contractor regarding the purchase and finance of offshore drilling rigs and associated flag, class and regulatory compliance issues.
Represent Sunoco Partners Marketing & Terminals LP ("SPMT"), providing transportation and storage of refined products and crude oil, in defending against litigation challenges to plan approvals for major projects that it is undertaking at the Marcus Hook Industrial Complex (“MHIC”) near Philadelphia. These projects are vital to the MHIC’s ability and capacity to process natural gas liquids (NGLs) that have originated in the Marcellus and Utica Shales and been transported eastward through pipelines to the facility.
Representing ConocoPhillips, an American multinational energy corporation, in defending against claims asserted by overriding royalty interest owner who claimed that the client could not deduct post-production costs in calculating royalty payments. We represented the client at the trial level and have continued representing the client as part of the appellate team. We were a key part of the appellate strategy and had primary responsibility for briefing filed in the Texas Supreme Court. In ruling for our client, the Texas Supreme Court issued an opinion that will have a widespread, beneficial impact on oil and gas producers in Texas.

Advising Pertamina, the national oil company of Indonesia, on the development of its USD 5 billion Refinery Development Master Plan (RDMP), which involves upgrading and modernization of the 260,000-b/d Balikpapan refinery in Indonesia.

Advised one of the world's leading floating, production, storage and offloading (FPSO) service providers in connection with its deployment of an FPSO vessel to process oil & gas and store oil produced from the Anyala & Madu fields, offshore Nigeria. We assisted on compliance with Nigerian cabotage law, local content law, and the contract of hire for the FPSO.

Advising a multinational oil & gas company on the proposed development of an oil refinery in Sapugaskanda, Sri Lanka, and the associated downstream infrastructure.