The "Tribunals" and Tribulations of Section 1782: What Constitutes a "Foreign or International Tribunal?"

With the continuing globalization of litigation and arbitration, counsel engaged in arbitral proceedings outside of the United States are becoming more familiar with a powerful U.S. statute: 28 U.S.C. § 1782 (titled “Assistance to foreign and international tribunals and to litigants before such tribunals”) (Section 1782). Noticeably, there has been a recent flurry of important, and, at times, conflicting decisions from U.S. federal circuit courts related to the availability of Section 1782 to obtain information and documents from third parties in aid of private international arbitration. Most recently, as discussed further below, on 22 September 2020, the Seventh Circuit Court held that a private international arbitral tribunal is not a “foreign or international tribunal” under Section 1782. Servotronics, Inc. v. Rolls-Royce PLC, No. 19-1847, 2020 WL 5640466 (7th Cir. Sept. 22, 2020).

The Split of Opinion Among U.S. Circuit Courts 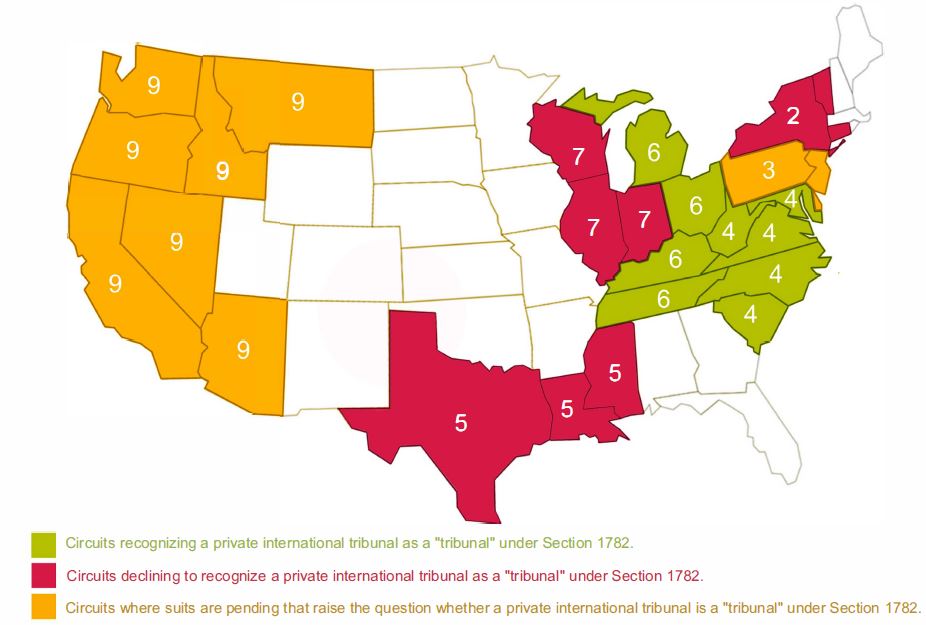 The Fourth and Sixth Circuit Courts, in the following decisions, have ruled that a private international arbitral tribunal is a “tribunal” within the meaning of Section 1782.

The Second, Fifth and Seventh Circuit Courts, in the following decisions, have ruled that a private international arbitral tribunal is not a “tribunal” within the meaning of Section 1782.

The Fifth Circuit Court, in El Paso, was the first circuit court following Intel to address the issue of what constitutes a “tribunal” under Section 1782. The Fifth Circuit Court chose to reply on its pre-Intel decision in Republic of Kazakhstan v. Biedermann Intn’l, 168 F.3d 880 (5th Cir. 1999) (holding that a “tribunal” within the meaning of Section 1782 did not include a private international arbitral tribunal), which it found undisturbed by Intel and, therefore, controlling. El Paso, 341 Fed.Appx. at 34. Similarly, the Second Circuit Court, in Guo, determined that its pre-Intel decision in National Broadcasting Co. v. Bear Stearns & Co., 165 F.3d 184 (2d Cir. 1999) (holding that the phrase “foreign or international tribunal” in Section 1782 does not extend to arbitral panels established by private parties) remained good law and applied it to deny the discovery application. Guo, 965 F.3d at 103.

Most recently, on 22 September 2020, the Seventh Circuit Court joined the Second and Fifth Circuit Courts in holding that a private international arbitral tribunal is not a “foreign or international tribunal” under Section 1782. Servitronics, No. 19-1847, 2020 WL 5640466 (7th Cir. Sept. 22, 2020). Based on a statutory context analysis and focused on the phrase “foreign or international tribunal” as used in several statutes, the Seventh Circuit Court concluded that the phrase “foreign tribunal” meant a “governmental, administrative, or quasi-governmental tribunal operating pursuant to the foreign country’s ‘practice and procedure.’ Private foreign arbitrations, in other words, are not included.” Id. at *6.

What’s on the horizon?

The split of opinion among the federal circuit courts has practical implications and necessitates strategic consideration. For example, if you represent a party in a private arbitral proceeding taking place outside the United States, you could, in aid of your claims or defenses in that proceeding, utilize Section 1782 to obtain information from a third party located in Maryland, North Carolina, South Carolina, Virginia, West Virginia, Michigan, Ohio, Kentucky, or Tennessee but not from a third party located in Connecticut, New York, Vermont, Indiana, Illinois, Wisconsin, Mississippi, Louisiana, or Texas. And if, by way of further example, you sought information from a third party that was located in both New York and North Carolina, you should consider pursuing your application in North Carolina and avoiding New York.

Given the continuing globalization of litigation and arbitration and the deepening U.S. federal circuit court split around Section 1782, it appears that this issue is ripe for the U.S. Supreme Court to address. Until this issue is resolved, however, parties involved in private international arbitrations who seek discovery of information in the United States should consider carefully where the discovery target is located and, if located in more than one state in the United States, further consider where a Section 1782 application is likely to be most successful. For those parties who seek to reduce the risk of Section 1782 discovery in international arbitral proceedings where they are a party, they should consider explicitly addressing this when drafting their arbitration agreements so as to impose limits on this type of discovery.