As climate change accelerates, clashes between states over water rights are heating up due to this resulting strained resource. The only court with authority to adjudicate these interstate disputes is the U.S. Supreme Court. In the 2020–2021 session, the Court likely will issue rulings that could alter the landscape of interstate water disputes and impact millions of people and thousands of businesses who rely on interstate water resources. A preview of the four cases slated for the 2020–2021 session and potential implications follows. Below is a map to illustrate the geographical reach of these disputes. 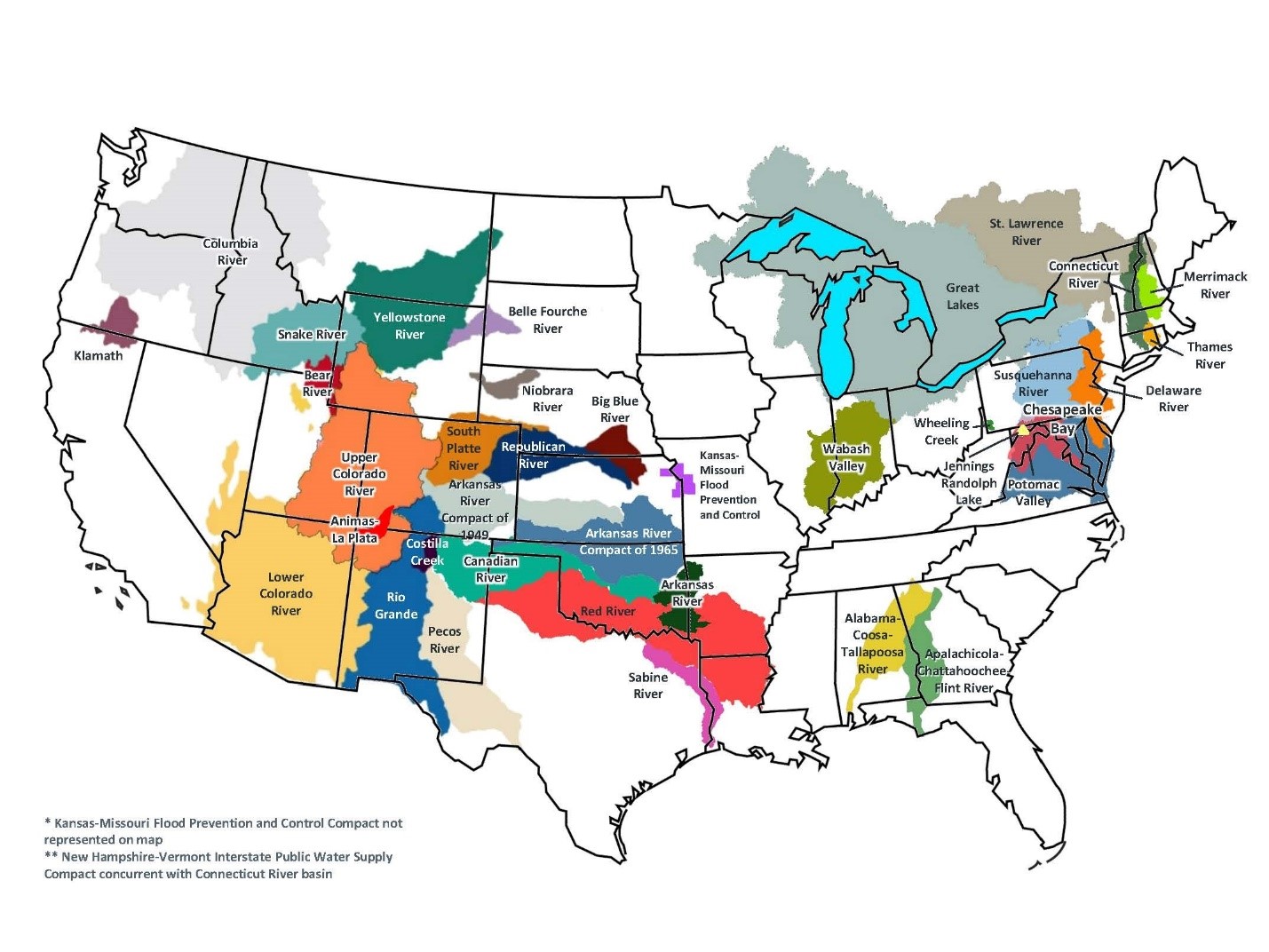 In June 2014, Mississippi filed a Supreme Court original action1 against Tennessee, alleging that Tennessee’s practice of drawing groundwater from an aquifer that lies below both states violates Mississippi’s sovereign rights, constitutes an actionable trespass and effects a conversion, taking, and misappropriation of property belonging to Mississippi.2 The core of the dispute centers on Tennessee’s pumping activities, which take place in Tennessee, but the groundwater is pulled from beneath Mississippi through geologically connected aquifers. Mississippi claims that the water is the exclusive property of the State of Mississippi and that it would not have moved were it not for Tennessee’s pumping activities; Tennessee, on the other hand, claims that the water is an “interstate resource,” much like a river that passes through several states.

The Court-assigned Special Master, which is essentially an interstate water brawl mediator, held an evidentiary hearing on this issue on 20 May 2020. The Special Master has not yet issued his report, but either way, the findings will be reviewed by the Supreme Court. Significantly, the Supreme Court has never decided whether groundwater can qualify as an interstate resource.

A related question is presented in the case of Texas v. New Mexico and Colorado: whether groundwater connected to surface water may be subject to apportionment under an interstate water compact. In 2013, Texas filed an original action against New Mexico and Colorado,3 alleging that New Mexico is violating terms of the Rio Grande Compact (Compact), an interstate agreement between Colorado, New Mexico, and Texas apportioning water from the Rio Grande River. Texas’s principle allegation is that New Mexico is unlawfully allowing groundwater wells to divert water that is hydrologically connected to the Rio Grande and thereby depriving Texas of the full amount of water it is due under the Compact. For more details on this dispute see our previous alerts on this case.4

The matter is still in discovery before the Special Master. Ultimately, the outcome of Mississippi v. Tennessee may impact the fate of this case.

The River Master ruled in favor of New Mexico, and Texas filed a motion for review before the Supreme Court. Oral argument is scheduled for the 2020–2021 session. The decision here will help define responsibility for water loss under the terms of an interstate water compact.

This years-long dispute between the two states is again headed for review by the Supreme Court.5 At issue is the question of whether the Supreme Court should equitably apportion Georgia’s water use based on its alleged harmful impacts to Florida. In the most recent round of hearings before a second Special Master, Georgia again emerged as the prevailing party. The Special Master found that Florida had not shown by clear and convincing evidence that Georgia’s use of the Flint River had harmed Florida’s seafood industry and that the benefits to Florida of an equitable apportionment would not substantially outweigh the harms to Georgia, especially because an intercepting reservoir operated by the Army Corps of Engineers could prevent most of the anticipated streamflow increases from reaching Florida anyway.6 Notably, the Special Master agreed with Georgia that the harms to Florida’s seafood industry, specifically the collapse of the Apalachicola Bay oyster fishery, were primarily the result of Florida’s mismanagement of that resource.7

In response, Florida has filed exceptions8 to the Special Master’s report with the Supreme Court, urging the Supreme Court to decline to adopt any of its recommendations and setting the stage for what may be the final review of this dispute. The hearing is expected to be scheduled for the 2021 term, assuming the Supreme Court chooses to set the case for oral argument.

These four cases, while geographically diverse, have several things in common with respect to how they will potentially impact water use across the country.

First, the Texas v. New Mexico and Texas v. New Mexico and Colorado cases both involve interstate compacts, legal devices entered into decades ago that were designed to avoid disputes between states. However, these static legal tools are unable to weather the changes incurred by increasing populations, decreasing rainfall and water storage capabilities, and shifts in between urban and rural economies. As a result, these interstate compacts appear to be sometimes causing more disagreement than resolution.

Second, Mississippi v. Tennessee and Texas v. New Mexico and Colorado both invite the Court, effectively, to allocate groundwater between states. Groundwater traditionally has been managed and regulated by state law. A decision in one or both of these cases could lay the foundation for federal intervention into state sovereign rights over groundwater regulation.

Third, all four of these legal battles underscore the increased demand placed on this natural resource. Whether the competition is between traditional irrigation and increased population growth, aquaculture and urban needs, industrial use versus municipal use, or energy production versus instream flow, water users of all types will either need to be prepared to draw their lines in the sand to defend their use or collaborate to use both legal and technical tools to efficiently and effectively allocate this resource to meet the ecological and economic needs that it serves.

5 For additional details and analysis on this case, see our previous alert, “SCOTUS Ruling Gives Florida Chance to Prevail in Water War Against Georgia,” ( 17 July 2018.

8 Exceptions to Report of the Special Master by Plaintiff State of Florida and Brief in Support of Exceptions, Florida v. Georgia, No. 142 (U.S. 13 Apr. 2020).