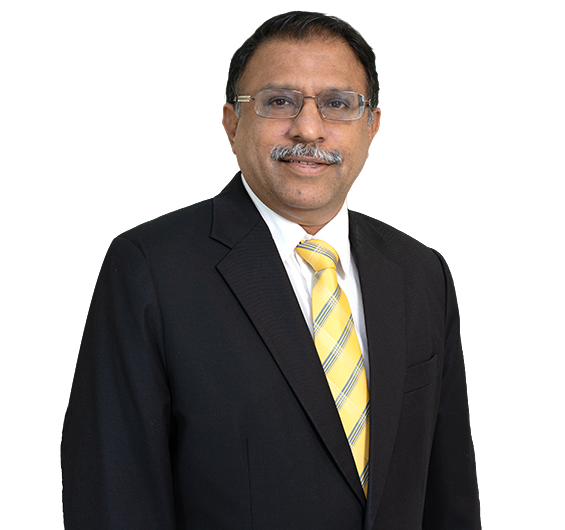 Sundararaj Palaniappan has an extensive litigation practice spanning commercial and trade litigation as well as international arbitration. He is also noted for his skilled handling of banking litigation matters. He also shares his experience with young lawyers, guiding them in advocacy and court work.

Sundararaj regularly appears before the Supreme Court of Singapore. He also appeared before the Privy Council in London and argued an appeal in the late nineties in one of the last appeals that went before the once highest tribunal of the land. He has been involved as counsel in arbitrations under the SIAC rules and New York Arbitration rules.

He has considerable experience in handling complicated commercial litigation matters. He has also argued criminal appeals before the High Court and Court of Appeal.

Sundararaj started his career with the Attorney General’s Chambers as a deputy public prosecutor and state counsel from 1989 until 1994. He joined Derrick Ravi and Partnership in 1994, which merged with Raja Loo and Chandra to form Straits Law Practice LLC in 2001.

He also shares his experience with young lawyers, guiding them in advocacy and court work. He has been an advocacy trainer at annual courses conducted by the Law Society for Legal Practice Trainees for many years.

Sundararaj graduated with a LL.B. (Hons) from National University of Singapore in 1988 and obtained Masters in Law in 1994.

Sundararaj has contributed to the legal literature in Singapore. He has edited the Atkins Court Forms on Civil Procedure and updated chapters on evidence, torts, contract, and commercial crime in the Halsbury’s Law of Singapore, which are the main sources of legal literature consulted by practitioners. He has presently been commissioned to edit the Halsbury’s Law on Contract and Torts.