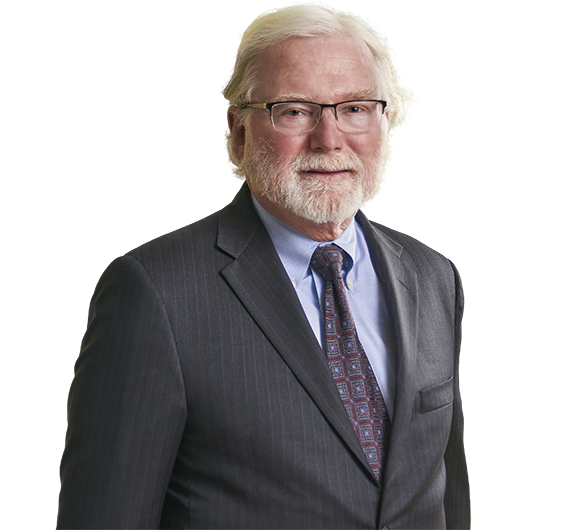 In 50 years of practice as an attorney, Tom Wolfendale's litigation and legal counseling work has involved civil and criminal practice in state and federal courts as well as regulatory agencies and private dispute resolution forums. Work has encompassed subject areas such as construction contracts and projects, environmental civil and criminal matters, municipal governance, tort, products liability, CERCLA, RCRA, Clean Water Act, Clean Air Act and land use issues. He has represented public and private individuals, entities and corporations, developers, architects, engineers, general contractors, and subcontractors, as plaintiffs and defendants in these matters. Tom served as chair of the Uniform Contracts, Rules and Regulations Subcommittee of the Washington State Bar Association Section on Public Procurement and Contract Law, served as the Chair of the Washington State Bar Association Construction Law Section and was an executive board member of both the Environmental and Land Use Law and Public Procurement and Private Construction Law Sections of the Washington State Bar Association. He has lectured on the subjects of public procurement, construction law, environmental and land use law before attorneys' organizations and private business groups.

Tom was a senior deputy prosecuting attorney for 10 years in the civil and criminal divisions of the King County Prosecutor's Office, where he represented King County in criminal, tort, eminent domain, employment law and construction matters. Since 1981, he has been in private practice with firms whose practices have included public and private clients engaged in large and complex private and public construction and environmental activities as well as municipal governance, torts, trademarks and products liability issues. The work has ranged from the conception of a construction project through to completion, including consideration of environmental issues and regulatory review, project delivery system selection, procurement methods, contract drafting, construction counseling, and resolution of construction disputes. With public sector work, he has litigated and counseled public and private clients on public works projects, public sector law matters, including public transit, public correctional facilities, public water treatment, facilities, public records act requests, open public meetings, jurisdictional issues and board conduct. Tom also brings, from public and private sector litigation practice, experience with cases involving products liability, employment discrimination and toxic torts. In addition to litigating matters before courts and administrative agencies, he has served as an arbitrator and mediator for the American Arbitration Association, the U.S. District Court for the Western District of Washington and for private parties, while counseling and assisting clients on the effective use of alternative dispute resolution processes to successfully conclude problems.

Tom has been selected to the Washington Super Lawyers List (2003–2006, 2009–2010, 2013–2018) and to the Corporate Counsel Edition in Construction Law. He was also recognized by Martindale Hubbell for preeminent status in Transportation Law.

Beginning in1976, while a senior deputy prosecuting attorney for King County, he provided project and day-to-day advice to the County Department of Architecture, which oversaw all county capital projects with the exception of road building. Tom entered private practice in 1981 and has practiced with firms, whose clients were involved in large and complex private and public construction projects.

Most recently, Tom and a team of Seattle K&L Gates litigation attorneys represented the City of Seattle in two major waterfront construction projects.

The team represented the city in litigation against the state department of transportation and the joint venture contractor arising from the construction of a new underground tunnel which replaced an old waterfront viaduct highway. This was Seattle’s version of the Boston Big Dig project. The boring machine was named Bertha. The case centered around the deformation and damage to the city’s main water lines and other utilities when the tunnel construction halted due to failure of the contractor’s boring machine. The damage occurred because the rescue pit for extracting the non-functioning boring machine disturbed the water zone of influence that in turn disturbed the soils supporting the city’s facilities. The case was settled on the eve of trial.

The team also represented the city in the renovation and restoration of the Seattle waterfront seawall, which involved counseling the city attorney’s office, the mayor, the city council and the city’s project manager through a series of project issues, including delay, design and related construction issues. All the disputes were resolved short of litigation.