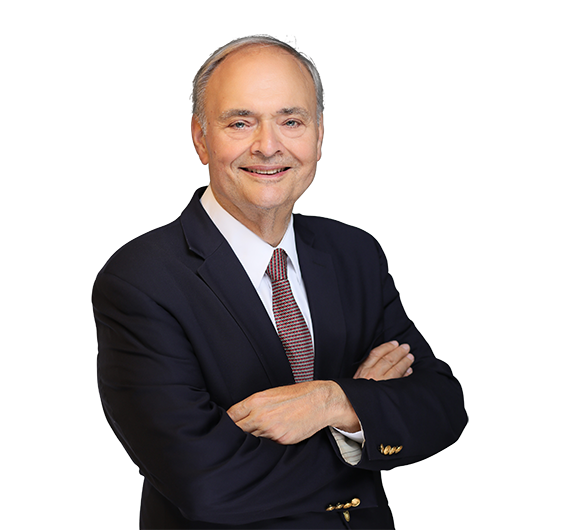 Emanuel (Manny) Rouvelas engages in a wide-ranging law and lobby practice representing leading companies and trade associations in transportation, telecommunications, high technology, hospitality, and manufacturing. For nearly five decades, he has traveled globally to more than forty countries advising clients and working with U.S. administrations, Congresses, and American and foreign embassies and governments.

Manny opened the Washington, D.C. office of Seattle’s Preston firm in June 1973 and guided its growth to more than 140 people at the time of its merger into K&L Gates in 2007.  He is a founder of both the public policy and maritime law practices of K&L Gates, each consistently ranked nationally as among the best, most effective, and highly regarded in the United States. Manny is personally ranked as one of the country's top lawyers in both maritime law and in government affairs by Best Lawyers in America, Super Lawyers, and Legal 500. For fifteen consecutive years he has been named a “Top Lobbyist” by The Hill newspaper based on surveys of members of Congress and staff. In its 30th year anniversary edition, Legal Times newspaper recognized him as “one of the greatest Washington lawyers of the past 30 years,” a “legal visionary,” who helped turn Washington, D.C.'s legal and lobbying community into an international powerhouse. In 2020 Chambers USA ranked him in the top band of three lawyers nationally in Government Relations and in the top band of five lawyers in Transportation: Shipping/Maritime: Regulatory.

Prior to joining the firm, Manny was counsel to the U.S. Senate Committee on Commerce and chief counsel to its Merchant Marine and Foreign Commerce Subcommittees, where he had lead staff responsibility for the enactment of thirty-two public laws. Included was major legislation relating to vessel construction and operation, oil spill prevention, vessel traffic systems, recreational boat safety, Coast Guard, Maritime Administration and Federal Maritime Commission programs.

Manny has served as an advisor to two U.S. presidential transitions, a bipartisan Congressional caucus, an executive branch reorganization, several senators and congressmen, and many political campaigns. In 2016 he served on the Bipartisan Policy Center's working group, “Selecting a Vice President: Balancing Politics and Prudence.” An honors graduate of the University of Washington, Harvard Law School, and participant in the Advanced Management Program at Harvard Business School and the Program on Corporate Governance for Directors at Stanford Business School, Manny has long been committed to the importance of strong ethical governance in both the public and private sectors. He has taught, lectured, and counseled clients on governance issues. He has twenty years of experience serving on the boards of directors of three U.S. publicly traded companies and thirty years of service on the boards of directors of nonprofit charitable organizations, including the American Architectural Foundation, Greater Washington Board of Trade, National Hellenic Society, Smithsonian National Zoological Park and Conservation Biology Institute, and Washington Monthly magazine. He is a lifetime trustee, former vice-chair of the board, and visiting professor at the American College of Greece in Athens.

In 2019, Manny was a co-founder and advisor of Lawyers Defending American Democracy, a coalition of lawyers united in the defense of our democracy, Constitution and values.  He was also a co-founder of the National Vote at Home Institute, a nonpartisan nonprofit ensuring Americans can vote in fair, accessible, secure, transparent, equitable, and reliable Elections (Made up of former election officials, policy experts and communications professionals) and has continued to serve as an advisor.

In 2020, he assisted and served as an advisor to the Connected DMV.  The organization provides real world solutions for real regional impact in the District, Maryland, Virginia metropolitan area; delivering initiatives that can have the power to fundamentally reshape physical, digital, social and economic infrastructure in the region.