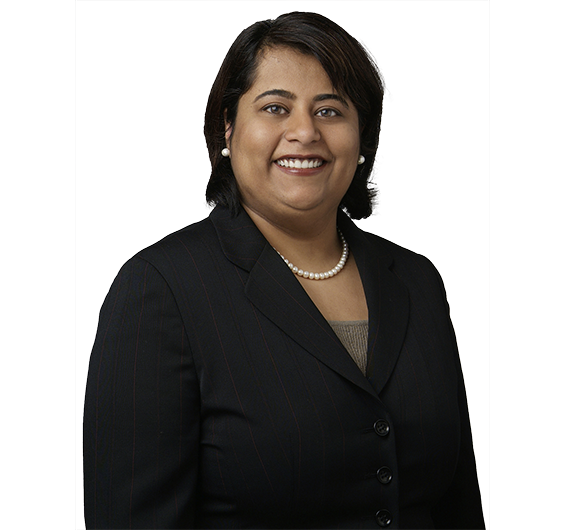 Pallavi Mehta Wahi is the Managing Partner of the Seattle office and Co-Managing Partner of the United States for K&L Gates. She is Chair of the Firmwide Diversity Committee and a member of the Management Committee. Pallavi frequently represents clients in complex commercial litigation matters and works closely with many Fortune 50 corporations and other companies worldwide, representing their interests with an emphasis on corporate and technology issues. She has argued before various tribunals and courts in hearings and at trial with success. She has represented clients across the country in multiple jurisdictions in commercial and intellectual property disputes. She also acts as the trusted advisor and litigator for several clients across a wide range of jurisdictions, countries, and business matter areas. She represents some of the largest household brands in the world on a regular basis.

Pallavi is ranked in Chambers USA for Litigation: General Commercial in Washington State. She also has been named to the Washington Super Lawyers list for Business Litigation for many years; the “IP Stars” list published by Managing Intellectual Property in the U.S. and Washington State categories; and recognized in Best Lawyers in America in the Commercial Litigation and Litigation – IP categories. She is similarly included in “The A-List: International,” a list of the top India-focused lawyers at international law firms, compiled by The Indian Business Law Journal, and is an active member of the International Women's Forum.

Pallavi was also named to the fifth annual “Power List” by Lawyers of Color which recognizes the most influential minority attorneys and allies in the nation. She was included in the inaugural “Nation's Best” List, also published by Lawyers of Color, which recognizes noteworthy accomplishments and a commitment to diversity and inclusion. She was selected by the National Diversity Council as one of Washington's “Top 15 Business Women” and selected to the Indian Corporate Counsel Association's “Most Trusted Corporate Lawyers” list. She is also a past recipient of the Outstanding Young Lawyer Award from the King County Bar Association.

Pallavi is an experienced and well-known litigator in the local and national arena and business community. In 2022, she was appointed to the Seattle Branch Board of Directors of The Federal Reserve Bank of San Francisco to represent the interests of the 12th Reserve District and help the Board fulfill its policy and operational responsibilities. She is currently serving as the Chair of the Greater Seattle Chamber of Commerce Board and is a passionate advocate for the Seattle business community and the people and companies who help it thrive.

Prior to joining the firm, Pallavi was associated with the Seattle firm of Stokes Lawrence P.S. She was also a Rule 6 law clerk to the Hon. Commissioner William H. Ellis at the Washington State Court of Appeals, Division I.